From NintendoWiki, your source on Nintendo information. By fans, for fans.
(Redirected from Nintendo Vs. System)
Jump to navigation Jump to search 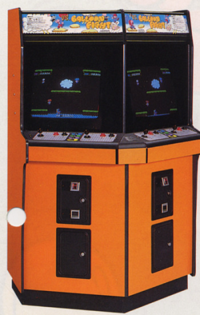 A VS. Balloon Fight machine

The Nintendo VS. System is an arcade machine using the same type of chips on the Play-Choice 10 used for competitive play. Almost all the games on the VS. System ran on identical hardware, with the notable exception that four special PPUs (video chips) were also made, each containing a different palette (each of which appears to arrange the colors completely randomly). Most boards could be switched to a new game simply by swapping the program ROMs, though the appropriate PPU would also have to be used - if not, the game would appear with incorrect colors. Several of the later VS. games employed further measures of protection by using special PPUs (Palette Processing Unit) which swapped pairs of I/O registers and/or returned special data from normally unimplemented regions of memory - attempts to run these games in other VS. systems would result in the game failing to even start. Some games had higher contrast and details the the original ones released on the NES. They lasted from 1987 to 1989.