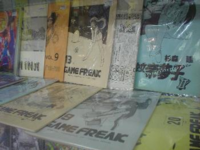 Game Freak was also a pen name of Satoshi Tajiri.[1]

Gaps are intended in case any volumes were cancelled; only volumes confirmed are listed.

Xevious 1000 Man-Ten e no Kaihou (Japanese: ゼビウス1000万点への解法), "How to Score 10 Million Points in Xevious" was an early Japanese game strategy guide for Xevious, written by an expert player Yasuhiro Oomori (大堀康祐) (pseudonym: うる星あんず, Urusei Anzu) with the help of Nakagane Naohiko (中金直彦) in 1983.[2]

After Satoshi Tajiri/Game Freak were asked to publish it together, they advertised it in Supersoft Magazine (スーパーソフトマガジン); a supplement to Mycom BASIC Magazine (マイコンベーシックマガジン). This guide was infamous for exposing Namco source material not intended to be known by the public; by comparison Satoshi Tajiri's feature on Xevious did not have this information.[3]

Game Freak have been mentioned as having reprinted their own version of this book, but details whether they did as opposed to just advertising it are unclear.