Difference between revisions of "Killer Instinct"

Originally released in the arcades in 1994, it was later released for the Super Nintendo Entertainment System, followed by the Game Boy and published by Nintendo.

In 1995, there was also a special Walmart Game Boy bundle released with the Game Boy version of Killer Instinct.[1] 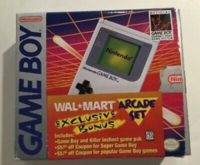