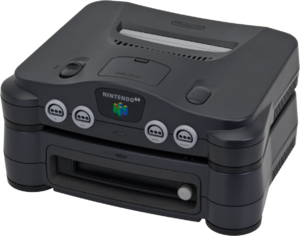 The Nintendo 64DD (short for "Dynamic Drive"[1], Japanese: ニンテンドウ64DD, Nintendō Roku Jū Yon DD) is a peripheral released for the Nintendo 64 in Japan. It plugs into the EXTension port at the bottom of the Nintendo 64 console and allows for the use of magnetic 64DD Disks containing games, extra content, or extra memory. The Nintendo 64DD was released late in the console's lifespan and was a commercial failure.