The Nintendo GameCube (Japanese: ニンテンドーゲームキューブ), officially abbreviated GCN in North America and Europe or NGC in Japan, is Nintendo's sixth-generation home console. Codenamed "Dolphin" during development, the console was released on September 14, 2001 in Japan, November 18, 2001 in North America, May 3, 2002 in Europe, and May 17, 2002 in Australia. The system features a more compact design with four controller ports, a controller with an ergonomic design, small but large-capacity discs, connectivity with the Game Boy Advance and a form of online play. In 2006, it was succeeded by Wii, which also features ports for most GameCube hardware as well as compatibility for its software on original models. Nintendo discontinued manufacturing in 2007.

The Nintendo GameCube was released in four colors. At launch, only the Indigo and Jet Black models were available. Later, in November 2002, a limited edition Platinum system was launched.[1] Finally, in Japan only, a "Spice" orange console was released, though controllers of the same color were released in all regions. 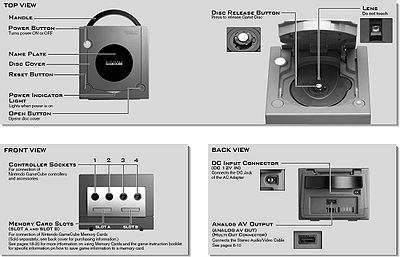 Overview and labeling of the Nintendo GameCube's external components.

The Nintendo GameCube is the first Nintendo console to use optical discs as the primary format for games. Games on the system use 3.5 inch (8 cm), 1.5 GB proprietary miniDVD discs, and as such the system cannot play audio or video discs. As the system plays disc-based games and the console itself has no internal memory, the Nintendo GameCube requires a proprietary Memory Card for saving game data, which saves data in "blocks". The system has two slots for compatible Memory Cards; while three official size options were released, third-party Memory Cards were also manufactured.

While the system will automatically play the inserted game after powering on, the player can access the system menu by holding down the A button during startup, or by starting the console without a Game Disc inserted. From the system menu, the player has one of four options, accessed by tilting the analog stick in the appropriate direction. By tilting up, the player can play the currently inserted game. The Nintendo GameCube is the first Nintendo system to feature a built-in internal clock, which can be accessed and adjusted by tilting the analog stick to the right. By tilting down, the player can view the data on the two currently plugged in Memory Cards, and copy or move data to the other Memory Card or erase data. On the left is the Options menu, where aspects such as the sound output (mono or stereo), the screen position, and language can be adjusted.

The Nintendo GameCube can natively output analog video at 480i resolution through the Stereo AV Cables or S-Video Cables, used by both the SNES and Nintendo 64, which output through the 'Analog AV Out" port, or using the RF Switch by plugging the RF Modulator into the port. Japanese and PAL systems can also use the RGB Cable. Model DOL-001 consoles also support 480p video output, using the Component Video Cables (sold at retail exclusively in Japan, though component cables could be purchased on Nintendo's online store in other regions), or, in Japan only, the D-Terminal Cable; both of these cables use the "Digital AV Out" port, which was removed on later consoles, and the Analog AV Out port is still required for audio. Several games have optional native support for "progressive scan" mode by holding down the B button as the game boots up, allowing the game to display at 480p; this is only necessary the first time the game is being played in progressive scan mode, however, as the game will automatically display the prompt every time afterward if using 480p-compatible cables. Some Nintendo GameCube games also support 16x9 widescreen display. Finally, in the PAL region only, several games support "PAL60" mode, which allows games to be played on more modern 60Hz displays. Stereoscopic 3D technology was built in to the hardware, and would have used an accessory to enable it, but the accessory was never released as 3D-compatible televisions were not widespread, and the accessory would have been too expensive. Notably, only Luigi's Mansion was developed with support for stereoscopic 3D.

The Nintendo GameCube Controller is the primary controller for the console, one being included with each system and in the same color as the system. While the controller makes use of all the standard buttons of the Nintendo 64 and SNES, it also features a second control stick, as well as a more ergonomic design.

The Nintendo GameCube Action Pad is a dance pad peripheral released by Konami exclusively alongside Dance Dance Revolution: Mario Mix. The Action Pad has many of the same inputs as a standard GameCube controller, but lacks L and R buttons. Two versions of the pad were released.

The DK Bongos are a controller shaped like a pair of bongos. The controller features four buttons: the two drums, a "Start/Select" button, and the microphone. As the name implies, the bongos are primarily used for Donkey Kong games, namely the Donkey Konga series and Donkey Kong Jungle Beat.

Because of the changes in design for the Panasonic Q, a special Game Boy Player was released exclusively for use with the system.

The Nintendo GameCube Microphone is a microphone accessories that allows players to use voice commands in compatible games. The microphone plugs into one of the system's memory card ports. The game Odama also features a clip which attaches the microphone to the controller.

Before the system's launch, Panasonic stated that the company had no plans for a North American release.[3] Following the price drop of the standard Nintendo GameCube in mid-2002, Panasonic also announced that the Q would receive a price drop.[4] The system was announced to be discontinued in December 2003, presumably due to low sales.[5]

After May 2004[6], Nintendo began to release a newer model of the Nintendo GameCube, DOL-101, which featured several differences from the original version to cut costs and improve the existing hardware:

The GameCube was not very successful when compared to contemporaries, the Sony PlayStation 2 and newcomer Microsoft's Xbox console, only outselling former rival Sega's Dreamcast console. The GameCube sold 21.74 million units worldwide. The GameCube also held the title of being Nintendo's least successful console up until 2017 where the Wii U surpassed it with its lifetime sales of 13.56 million units.

The GameCube was hurt by several factors. One of them was its image as a "kiddy" console, in a market that was being increasingly dominated by older audiences and games with "Teen" and "Mature" ratings, such as Grand Theft Auto. Unlike its competitors, the GameCube lacked the ability to play DVDs and online play. Although it managed to sell ahead of the Xbox from 2001 to 2003, a lack of new titles caused the system to climax long before its competitors.

Despite the subpar sales, the GameCube and many of its titles have received critical acclaim. IGN rated the GameCube the 16th best console of all time, citing its impressive technology and great titles. It had a total of 41 titles to sell over one million units, including three to exceed 5 million sales.[8] The best selling game on the system, Super Smash Bros. Melee, is also among the top best-selling fighting games of all time. Some GameCube games, such as Metroid Prime, Resident Evil 4, and The Legend of Zelda: Twilight Princess, are considered to be some of the greatest games ever made.