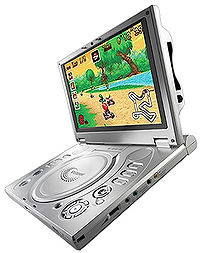 The Visteon Dockable Entertainment System (officially called Dockable Entertainment featuring Game Boy Advance) is a portable DVD player created by Visteon that has the ability to play Game Boy Advance games. It was released in 2006 and originally had an MSRP of $1299 USD. It also came with wireless headphones, a wireless game controller and a remote control. It is also compatible with audio CDs, MP3 and WMA files.

There is also a 6-pin serial port that allows up to four people to play with a multiplayer game by using a Game Boy Advance game link cable.