The unit came with a theme song by Hirokazu Tanaka, known as the "Glorious March" theme in the Lost Tapes album. 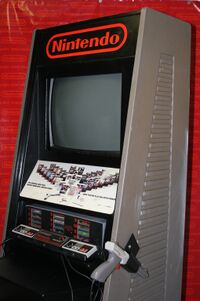 A kiosk unit of M82 on display in an arcade-style cabinet.

The unit contained up to 12 pre-selected cartridges and allowed players to select between them using the red button on the front centre. A play time limit of 30 seconds, 3, 6 or 128 minutes would be set by a button on the rear of the unit, after which the system would reset. The unit requires a coax key to access the cartridge slots.