Uniracers (released in Europe as Unirally) is a racing game released for the SNES, developed in collaboration between Nintendo and DMA Design. Originally known as "1x1" in development and intended to be a platforming game[1], the game was released in North America in late 1994, and in Europe in early 1995.

Soon after the game was released, DMA Design was sued by Pixar, who claimed that the game's unicycles (originally CG-rendered) infringed on their 1987 short film Red's Dream. Pixar won the suit, forcing Nintendo to terminate production of additional Uniracers Game Paks.[1]

Single-wheeled and single-minded, Uniracers are the best at what they do: accelerate to screen-blurring speed! They're also awesome at pulling flips, twists, turns and catching monster air off of the many mondo ramps, hills and half pipes of their race track worlds. The more outrageous the stunt, the faster the Uniracer goes! The sky's the limit!

Racing is the entire purpose of a Uniracer's existence. You can race against the clock, against friends head-to-head or in a custom tournament. Challenge the mysterious ghost bike to become the uni-versal champion! It's one of the fastest races on the Super NES yet! 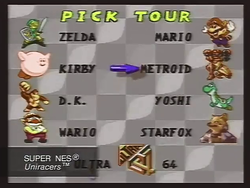 The preview Tour select screen in the pre-release footage from a Nintendo Power Previews #9 commercial.