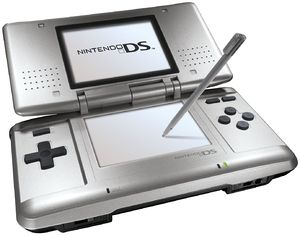 The Touch Screen is a feature in Nintendo products and a screen with touch-input functionality.

Before Nintendo's Nintendo DS, which introduced the Touch Screen as the bottom screen and a regular screen as the top screen, it was not considered as much as a mainstream product for gaming devices as it is today.

Some Nintendo DS games require exclusive Touch Screen control for actions such as movement, while others such as Super Mario 64 DS, can be controlled with the D-pad as well (with optional touch control for moving the characters around), with other buttons being kept for actions specific to the game such as Mario jumping.

The Touch Screen was viewed as innovative and more intuitive to demographics (such as the elderly) who stereotypically may not have been as familiar with gaming and/or the older means of input on a controller, such as the D-pad, buttons (also including shoulder buttons) or an analog stick. In 2005 onward, various games for the Nintendo DS were released under a related branding known as Touch! Generations.

However, for some users touch-input may be considered as too sensitive, or there may be difficulties pointing at an exact place on the screen (see also: Touch Screen recalibration); hence they may prefer to stick with traditional input from the D-pad. Later Nintendo DS, Nintendo 3DS, and Nintendo Switch games may tend not to use the Touch Screen much at all, though Motion Controls through the Joy-Cons is still a large part of Nintendo Switch (such as with the games ARMS and Nintendo Switch Sports).

In 2006, the Wii introduced Motion Controls; a newer form of input in Nintendo games. The Touch! Generations branding was continued for various Wii games, including the launch title Wii Sports, a game featuring the Wii Remote's Motion Controls which became greatly popular. Motion Control is a form of input simply by moving the device around. Like the Touch Screen, the simplicity of Motion Controls lead to their success, however this input method is subject to faults as well, or misuse (see Wii Safety Strap).