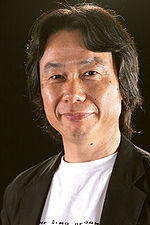 Shigeru Miyamoto (宮本茂, born November 16, 1952) is a world-famous video game designer and creator, known as the man behind five of Nintendo's most well-known franchises: Super Mario, The Legend of Zelda, Star Fox, Pikmin and F-Zero. His titles are characterized by sophisticated control-mechanics and interactive worlds in which the player is encouraged to uncover things for themselves.

In his early childhood, Miyamoto was raised in the rural town of Sonobe, Japan. His home lacked a television, so he would spend a large amount of his time exploring the surrounding countryside.

Miyamoto wanted to make things that would astonish the world. He considered becoming a puppeteer, a painter, and later made toys. He decided to study industrial design at Kanazawa Munici College of Industrial Arts and Crafts in 1970. He only attended class half the time, so it took him five years to graduate.

Miyamoto was 24, and had shaggy hair when he had his father contacted an old toy company friend, Hiroshi Yamauchi. The company's name was Nintendo. Yamauchi requested to see some toy designs, to which Miyamoto responded to by returning with a bag of goodies, and an amazing portfolio. Miyamoto became Nintendo's first staff artist in 1977.

Employed by Nintendo (then a toy company) as an artist, in 1980 he was given the task of designing their second arcade video-game after their first one, Radar Scope, which was a horrible failure in America. Yamauchi called Miyamoto into his office, as he was the only staff member available at the time. He questioned Miyamoto about his knowledge on this new concept. After some licenses fell through, the resulting arcade game, Donkey Kong, was a colossal success and the game's lead character, Mario (then known only as "Jumpman"), would later become Nintendo's mascot. Miyamoto rapidly became Nintendo's star producer, was given his own team: R&D 4, later known as the Nintendo EAD, and built a large stable of franchises for the company, most of which are still active and very well-regarded.

At odds with customary industry practices, Miyamoto showed unwillingness to repeat existing titles and would rarely create a sequel without significantly evolving the game into an innovative experience. He is still considered one of the greatest minds and creators of our time. He continues to live and work in Japan. Despite being an influential figure in video games and responsible for multi-million dollar franchises, Miyamoto is said to be very humble, insisting on settling for an average income.