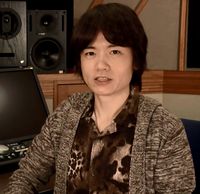 Masahiro Sakurai (桜井 政博 Sakurai Masahiro) is a Japanese video game developer, directer, and writer. The owner of Sora Ltd. and former HAL Laboratory employee, he is best known as the creator of the Kirby series, and creator and current director of the Super Smash Bros. series.

Sakurai began his video game career as an employee of HAL Laboratory. At the age of 19, he created and directed his first title, Kirby's Dream Land.

Sakurai continued to work at HAL and direct titles until August 2003, when he announced his resignation from the company, becoming a freelance developer. He cited the circumstances surrounding development of his most recent title, Kirby Air Ride, as the reason for his departure, criticizing both Nintendo and the industry as a whole for the increased focus on game sequels (later coining the term "sequelization").

After his departure, Sakurai worked with Tetsuya Mizuguchi and Q Entertainment to develop Meteos, a Nintendo DS puzzle game released in 2005. Later, on September 30, 2005, he announced the formation of his own company, Sora Ltd.; rather than develop its own games, Sora was founded as a way of contracting Sakurai for work on other companies' games. Around the same time, Sakurai also became a writer for Famitsu Weekly, writing his own weekly column mostly about his experiences both playing and developing games.

In 2009, Sakurai and Satoru Iwata founded a new Nintendo subsidiary, Project Sora, for the purpose of developing Kid Icarus: Uprising. The studio was closed in June 2012, after the game's release.

In February 2013, during development of his next titles, Super Smash Bros. for Nintendo 3DS and Wii U, Sakurai developed calcific tendinitis in his right shoulder.