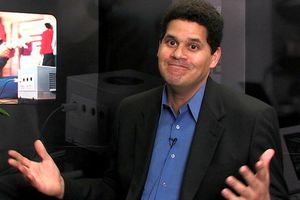 Reginald "Reggie" Fils-Aime (born March, 1961) is the former president and COO of Nintendo of America.

Fils-Aime began with the company as its Vice President of Sales and Marketing in 2003, responsible for the image Nintendo displayed to the world. Formerly chief marketing officer at VH1, Fils-Aime took the stage at E3 in 2004 to make Nintendo's announcements for that year. Introducing himself, he claimed to the audience:

As Fils-Aime continued Nintendo's presentation, he spoke with great enthusiasm about what Nintendo had to offer in the coming year, with Project Revolution, Nintendo's then-upcoming next-gen console, only two years away, fans were enthusiastic about Nintendo's return to glory. With the Nintendo 64 and Nintendo GameCube falling behind rivals Sony and Microsoft in sales, many fans were glad to hear Fils-Aime's introduction, with the internet soon dubbing his arrival at Nintendo as the "Reggielution".

In February 2019, it was announced that Reggie would be retiring from his position on April 15, with Doug Bowser succeeding him.[3]