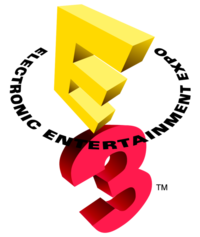 Electronic Entertainment Expo (E3) is an American video game convention and one of the conventions linked with Nintendo such as Nintendo Space World and World Hobby Fair.

In the past, many Nintendo games were showcased at this event in person and displays. Although Nintendo is still associated with the convention, currently their content is presented in a digital Nintendo Direct video through streaming and Nintendo Treehouse: Live sessions.