From NintendoWiki, your source on Nintendo information. By fans, for fans.
(Redirected from Mobile GB Adapter)
Jump to navigation Jump to search 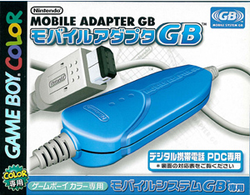 The Mobile Game Boy Adapter, known in Japan as the Mobile Adapter GB (Japanese: モバイルアダプタＧＢ) describes a cable used to connect to mobile phones for the Mobile System GB service, with a Game Boy Color or Game Boy Advance. Some of its most popular uses were for the Japanese version of Pokémon Crystal Version, Mario Kart: Super Circuit and Mobile Golf.

The Mobile Game Boy Adapter was packaged with an application known as Mobile Trainer, which was used to configure the system and included the Mobile Home Page, a mailing system, and its special web browser. There is also a bundle which includes the adapter and Mobile Golf.