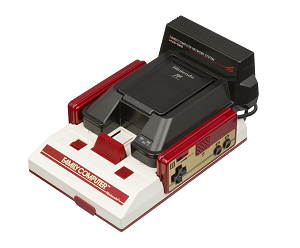 A Famicom with the modem attached

The Famicom Network System (Family Computer Network System, Japanese: ファミリーコンピュータ ネットワークシステム), also referred to as the Famicom Modem was Nintendo's first known online platform for a home console. Released for the Famicom in September 1988, the system comprises a dial-up modem that attaches to the console via the cartridge connector. Software for the system was distributed on long, thin cards called Tsuushin or Communication Cartridges. Unlike the larger, landscape-oriented Famicom Cassettes, the labels on these cartridges are portrait-oriented.

The network itself was a collaboration between Nintendo and financial services company Nomura Securities. Unlike other Famicom peripherals, the Famicom Network System was not used for video games, with the possible exception of Konami's Tsuushin Shogi Club. Nonetheless, several game prototypes have been developed for the platform, including an online version of Go). This particular game was personally requested by Hiroshi Yamauchi, Nintendo's president at the time.

Applications for the service included (but may not have been limited to) live stock trading, betting on horse and motorboat races and video game reviews and information moderated by a network of toy stores. Of these, the horse racing betting application proved the most popular, and it would later see releases on other consoles. The video game reviews were transmitted through the Super Mario Club software and service, introduced in 1991.

The service was reportedly discontinued in 2001, 13 years after its initial release, with the main application being on JRA-PAT, the aforementioned horse race betting service. The peripheral sold a total of around 130,000 units.

Cancelled adaption for Nintendo of America[edit]

According to a June 1989 New York Times article by Michael Freitag, an official localization of the network of some kind for the Nintendo Entertainment System in the USA was discussed between Nintendo and a different company, AT&T with Peter Main (Nintendo of America vice marketing president) estimating that it may release in that region in 1990.

In the end, no release candidate modem for the Famicom outside of Japan was ever released. The Teleplay Modem was an unofficial (and unreleased) third party NES modem project with three games known as Battle Storm, Terran Wars and Sea Battle but both Nintendo and SEGA refused to give it a license.